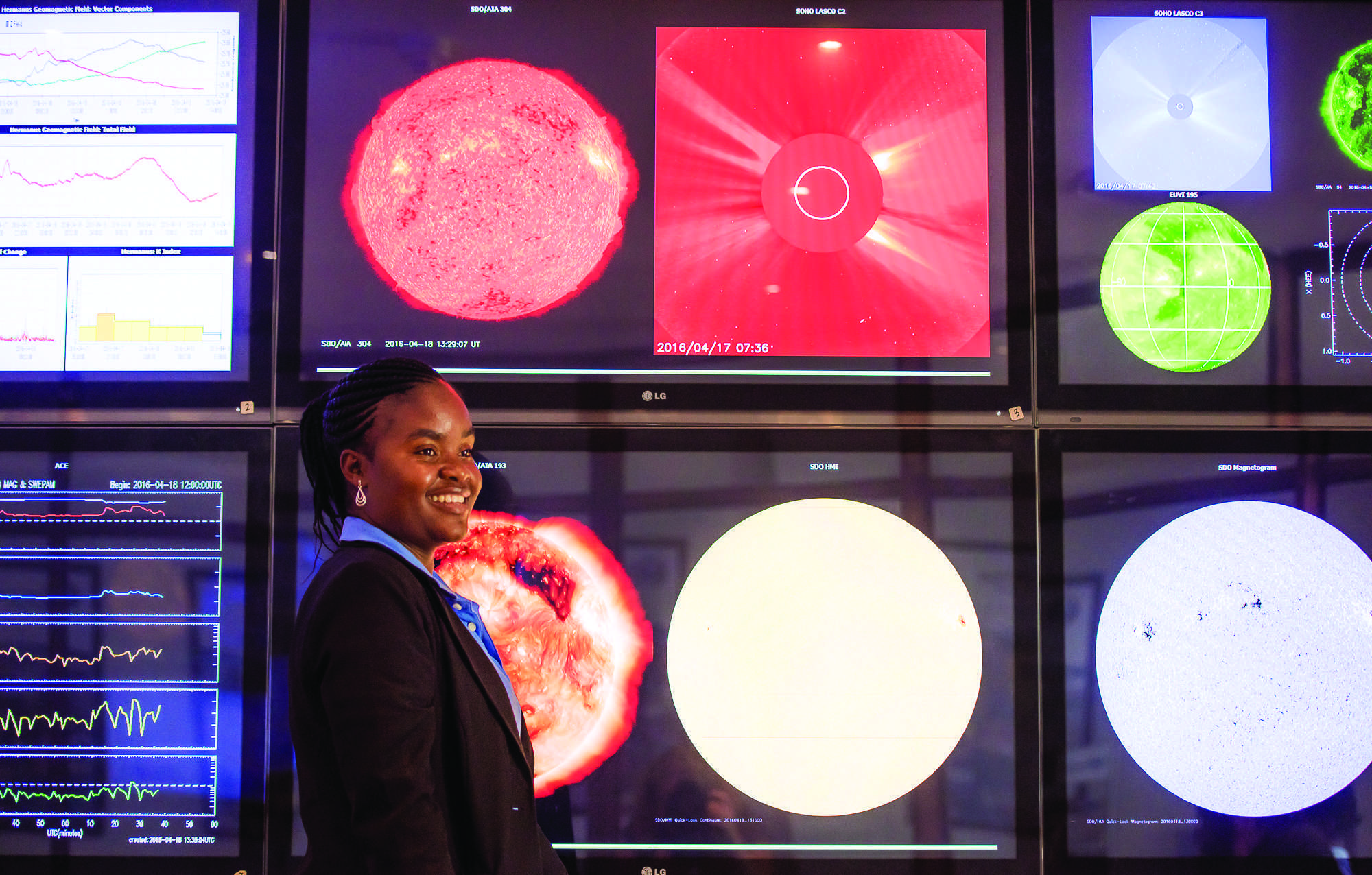 While her work does not require her to dress up in a spacesuit, don an astronaut’s helmet and rocket across galaxies at the speed of light, space science researcher, Dr Rendani Nndanganeni is a highly respected expert in the space science field.

At the young age of 31, Nndanganeni’s meteoric rise through the ranks at SANSA has been swift and spectacular. But she’s put in the hard work. Nndanganeni holds a BSc in Computer Science and Physics from the University of Venda and recently completed her PhD in Space Science at the North West University.

She’s published three articles in top international scientific journals and presented research papers to the Minister of Science and Technology, Naledi Pandor, and at various space science research conferences across the world.

Nndanganeni specialises in heliosphere physics – the study of theoretical, numerical modelling and experimental research on the acceleration, transport and modulation of charged particles (mainly cosmic rays) in the turbulent plasmatic environment around the sun, which is called the heliosphere.

Her work in the space science field might not sound as glamorous as being a roving space crusader landing on the moon,but it is equally, if not more, important.

As cross-polar traffic increases, the aviation industry is becoming more aware of the effect space weather can have on operations, and influence the performance and reliability of space-borne and ground-based technological systems – even endangering human life or health.

Nndanganeni’s research study looks at understanding the underlying causes and impact of space weather on the aviation sector in order to provide authorities with the correct information in addressing space weather-related issues – a field of study that hasn’t been fully explored in South Africa.

Where did your love and passion for science come from?

If I had to pinpoint it to a particular event, I think it came during a science Olympiad in Grade 8. I was always really interested in maths and science, even from a young age. However, my passion for space science and research came at a much later stage while I was completing my PhD at North West University. I’ve always loved exploring new things. While growing up, I would open up appliances and try to fix them. I enjoy finding solutions to problems.

Please explain your role at SANSA?

I’m a space science researcher at the South African National Space Agency. I head up the project on space weather. My work involves collecting and using the data provided by ground-based instruments and satellites to analyse space weather events.

What is space weather?

Space weather refers to conditions on the sun, in the solar wind, magnetosphere, ionosphere and thermosphere that influence the performance and reliability of space-borne and ground-based technological systems.

How does space weather influence our way of life?

What is the importance of space weather monitoring?

The importance of space weather monitoring lies in the global dependence on technological systems for economic vitality and national security. Space weather can disrupt technological systems such as satellite and airline operations, communication networks, navigation systems and the electric power grid. It’s essential for the improved understanding and forewarning of solar events that could lead to severe space weather on Earth. Affected industries can be put on standby and the scientific information will allow them to make the necessary decisions and preparations.

Would you encourage other black women to choose a career in science or space research?

RN: Yes, absolutely. SANSA is extensively involved in educating and empowering local communities with knowledge through public lectures, World Space Week and National Science Week. The space science industry offers many exciting career opportunities for young people. Through our own Science Advancement programmes, we reach out to various rural schools. There’s a common misconception that, after your BSc, your only option is to teach. This is not true. You can be anything! Through your BSc degree, you’ll acquire the necessary skills to solve problems.

What are the challenges of working in your industry?

The challenge is the lack of science skills (relating to STEM) coming through the ranks in our industry. We encourage young people to join SANSA and increase the uptake and appreciation of science among the youth in South Africa. We want to improve scientific literacy among our learners, especially young women. SANSA supports exciting STEM initiatives in its drive to develop scarce and critical skills in key areas of national importance among young South Africans. This enables them to contribute to transforming our country into a knowledge-based and technology-rich economy.

As a black woman working in the space industry, how have you grown personally?

Being a project leader at such a young age has given me the confidence to communicate my work to colleagues without fear or limitations. I have a responsibility towards the people who work under me now. And I’m no longer worried about stereotypes.

Who are your role models or inspiration and why?

My grandmother is my biggest inspiration in life. She taught me to study hard and be anything I wanted to be. At the age of 80, she attended courses and classes to improve her reading and writing skills. She told me that I should always strive to do my best, no matter what.

What advice would you give to young women in South Africa who aspire to join the National Space Agency?

Never let anything or anyone stop you from realising your potential. Don’t let anyone tell you you’re not good enough. Women have the ability and capability to make it in the space science industry. Work hard, and make sure you get the necessary education. It’s not always easy but there are many opportunities out there.

This article was written by Anton Pretorius and originally appeared in the 13th edition of Top Women Leaders under the headline ‘Watch this space’.