Too big for the microscope: Meet nuclear physicist Senamile Masango, a young women making her mark in science 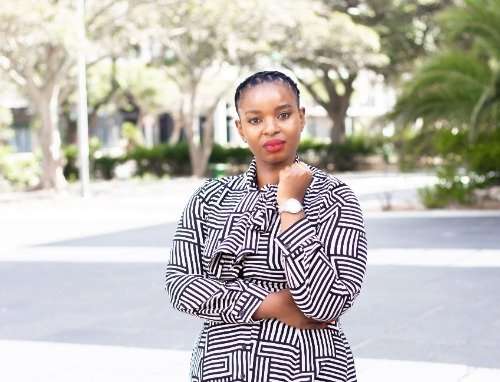 Senamile Masango is a celebrated nuclear physicist and the first African woman to form part of an African-led team conducting experiments at CERN, a world-renowned centre for scientific research where the Higgs-Boson was discovered. The 34-year old, who comes from a royal lineage, has been shining light for women and youth as she’s blazed a trail through the scientific community, notably attending university at the tender age of 16. Masango has been picking up accolade after accolade, recognised for the remarkable career she has already had at such a young age. We ask her a few questions about her background, and her views on youth and women in science.

Please tell us a bit about your background – how did you get to this point?

I come from Nongoma, a deep rural area in Kwazulu-Natal. I grew up in a polygamous household. My father had three wives, with my mother being the youngest. My mother is a princess from the Zulu royal family, so I am a princess as well. My father was well-known in KwaNongoma for his contributions to our community and Nongoma as a whole. He was a KwaNongoma chief inspector, a leader, a man of principle, and a good role model. He raised us well and is the one who planted the seed of education in us; he taught us Ubuntu and to be generous.

My father was a very strict man, so going to Varsity at the age of 16 felt like freedom to me because I wasn’t allowed to visit friends or have sleepovers at home. I was not very responsible, so I made mistakes, and as a result, I failed some of my modules and became pregnant. I would not advise parents to allow their children to attend varsity at such a young age, as I did; instead, they should consider a gap year program.

What motivates me is my desire to make a difference in the education, science, and energy sectors. South Africa does not perform well in science and mathematics, and we have even reduced our pass mark to 30%, which is unacceptable. Education in South Africa is now a luxury, and I advocate for better education for all. Another issue is that we lack resources such as laboratories, and since science is a practical subject, I want to raise funds and purchase mobile laboratories so that rural schools can have access to them. Climate change is a global issue, and South Africa is a signatory to the Paris Agreement, a 2015 international treaty on climate change. The major contributor to climate change is dirty energy sources such as coal, which emits CO²; therefore, I would like to contribute by providing innovative solutions for mitigating and adapting to climate change.

What do you think non-scientists can learn from scientists?

Non-scientists can learn from scientists how to be analytical thinkers, to always question things, and to solve any problem that may arise.

What does it mean to be a role model?

Being a role model is not an easy task; it requires you to recognize that people are constantly watching you and that your behavior and actions matter, so you must live up to those expectations. It also implies that you must be generous with your time, as you will be teaching, mentoring, and providing guidance. Role models change things for the better by showing them that their dreams are attainable, and this is a huge responsibility that should not be underestimated.

What advice would you give to young scientists?

Yes, science is challenging, and there are many stereotypes surrounding it, but don’t give up; instead, keep going and focusing on the big picture. When you arrive at your destination, please bring other young people with you.

Do you think South Africa is contributing enough to scientific research, and why?

South Africa does not contribute enough to scientific research because, most of the time, we rely on other countries to solve problems for us. South Africa needs to invest more in R&D so that we can build our own capacity to solve our own problems.

As a young person, how do you go about navigating spaces with more seasoned professionals?

Young people must learn from experienced professionals; we must not regard them as a threat; instead, we must allow them to guide us.

How do we get more young people involved in science?

We must bring science to society through science talks and public awareness campaigns. We must also encourage parents to take their children to places where they can see science in action, such as planetariums, observatories, aquariums, zoos, museums, and science expos.

What is your most significant milestone and why?

Participating in an African led experiment at CERN. I even received a congratulation message from the then President and the Parliament of South Africa. Being a founder and Chair of Women in Science and Engineering in Africa. Representation is critical; through my journey, I’ve been able to touch people’s lives while also giving back to society by promoting women in science and engineering in Africa.

What books would you recommend to our readers?

The Power of Character in Leadership by Dr Myles Munroe