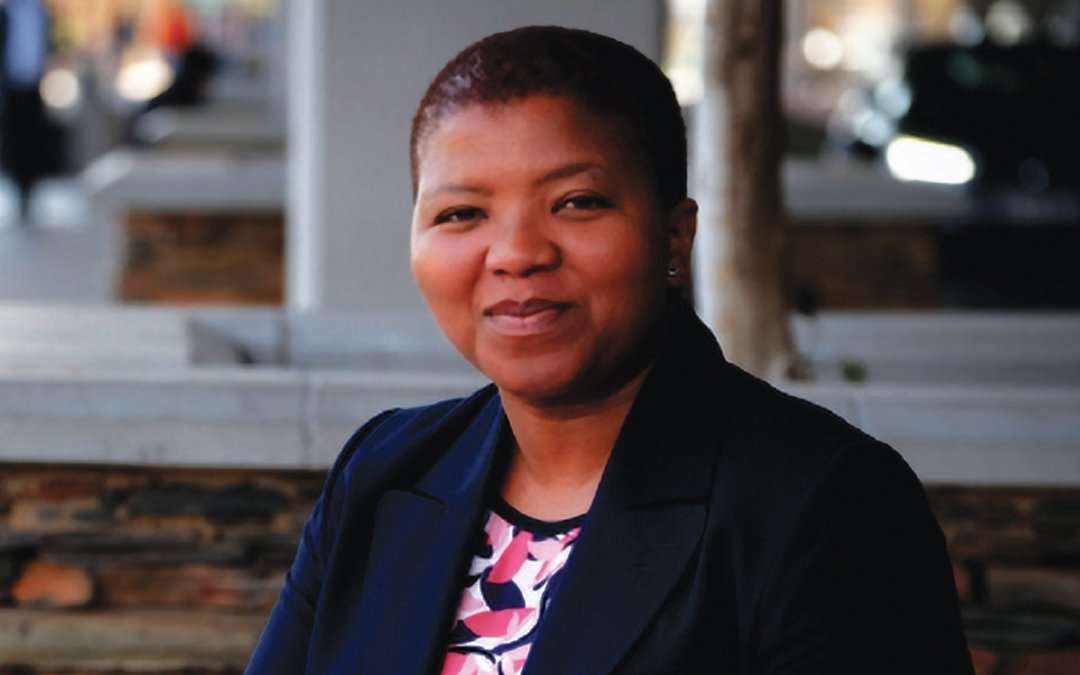 Nolwazi Mamorare, CFO of University of Johannesburg, speaks to Georgina Guedes about the kind of difference that can be made if you have the will to do so.

Nolwazi is a calm and thoughtful presence, but as soon as you start speaking to her, it becomes clear that she’ll do anything to achieve what she believes is right. It was this clarity of thought and dogged determination that saw her raising R700-million for student fees from 2015 to 2019.

“When I joined in 2014, part of my portfolio was student finance. At the time, we weren’t actively going out to seek funding to address the needs of the students. We were solely reliant on NSFAS, which wasn’t sufficiently funded at the time. I started a campaign for the missing middle – those that weren’t poor

enough or rich enough to receive funding. I am proud of the R700 million we’ve managed to raise since that time.”

This was achieved by knocking on the doors of partners and colleagues from Nolwazi’s previous life at the Auditor General, and by turning to public sector entities with a mandate to ensure skills development. “We got a great deal from the SETAs, by taking the admin off of their hands and providing them with prequalified students with good academic results that were needy.”

Nolwazi and her team also secured additional NSFAS funding by helping students to process their applications. When she joined, 10 000 students were NSFAS funded. After the first year of providing support to applicants, that number grew by an additional 5 000.

“I am proud to have led a team that has raised all this funding without seeking additional resources. It was a project carried out with what we had, that had never been a function in the finance portfolio, and it contributed to the financial sustainability of the university,” she says

Nolwazi never imagined she would end up being an accountant. When she was in high school, she and her classmates were taken to a career exhibition in Mthatha.

“I thought a career in librarianship sounded nice, so when the time came, I went to register at Vista University in PE, and the people at the registration desk said to me that with my marks, I should get into a B.Com degree – so that’s how I ended up in the accounting line.”

She started exploring what to do next, and realised that she could follow a CA path, which she couldn’t do at Vista, so she transferred to Rhodes.

“The rest is history. I haven’t looked at doing anything else. I can’t say it was an easy journey to get through my studies, but I haven’t wanted to do anything differently.”

She completed her articles at Fisher Hoffman Sithole, now PKF, in Port Elizabeth. She stayed on for one year after completing her articles, then moved on to KMMT, which after two years, merged with KPMG.

“Then, I’d had enough of auditing. I didn’t hate it, but didn’t want to be boxed into that role for the rest of my life. I wanted to see what was out there. So I joined an entity of Transnet called Protekon, which is now Transnet Rail Solutions, which works on the rail infrastructure. I joined as an accountant and got great hands-on accounting exposure. The scope was big in an interesting industry, with exposure to financial accounting and management accounting. I quite enjoyed it, but only stayed on for two years – I felt that was long enough for me.”

The next move was to the Land Bank at a time when they were introducing IFRS standards, which she describes as exciting. “It wasn’t a routine financial manager, particularly the project introducing the standards, and I thoroughly enjoyed it. It was also a different sector, which had its challenges and was a steep learning curve for me.”

She stayed there for three years, and would have loved to have stayed for longer, but towards the end of her tenure there, a number of irregularities emerged. “I didn’t like the manner in which they were handled or responded to, so I started looking for different opportunities.”

She moved on to Nedbank, which seemed like a natural transition in the finance space, but she soon realised something important about herself. “I quickly realised that I wasn’t excited about the idea of chasing profit. That on its own for me just didn’t excite me. I could have stayed on longer, but in three months, I decided that it just wasn’t for me, and I haven’t regretted the decision. I moved on to the Auditor General.”

There she stayed for seven years, and she says what really kept her going there, over and above the impact that she had on influencing the governance across a vast number of entities, was having a wide portfolio that included labour, agriculture and rural development, and higher education.

With one of her portfolios being universities, Nolwazi was involved with a project to address the fact that universities, which are excluded from the Public Finance Management Act to guarantee their academic freedom, still needed to have some level of accountability. “From the AG side, I led the team that worked on the new reporting regulations, in collaboration with the external auditors of all 26 South African universities and 50 TVET [then FETs] to ensure that they would audit the institutions in line with the requirements of the Auditor General.”

Nolwazi didn’t want to leave the AG, but found the higher education sector fascinating, so when she was approached by UJ, she gave the idea due consideration. “I thought maybe it’s time. I’d been for seven years in one organisation and while I wasn’t itching to leave, it seemed like a natural progression for me.”

Nolwazi joined the University of Johannesburg in 2015 as an executive director in charge of financial governance and revenue.

“Has it been a smooth ride? Definitely not, but it’s been a very interesting and exciting journey. What makes universities special is that you are not going to find this kind of experience in the public sector or the private sector. It’s a combination of the two and more. It’s the kind of environment that really builds your resilience and stretches your outlook, because you have to ensure that the institution is financially sustainable. You do that by continuously pushing to generate revenue, but at the same time, ensuring that you fulfil the social imperative.”